Posted at 05:00h in Blogs by developer 0 Comments
0 Likes

So You Want to Change the World is a 501c3 committed to empowering everyday people who want to make a real difference in the world.  Currently our focus is the Paris Pledge, a project in which civil society aligns on one purpose: stop Global Warming before it is too late. In the Paris Pledge, we call for three outcomes: 1) full decarbonization by 2050, 2) carbon pricing as the key driver, and 3) a citizen’s engagement network to hold our leaders to account. Janis Bookout, the author of this post, wears many hats at So You Want to Change the World.

My kids want you to take action. They want you to scroll down to the list of climate action items at the bottom of this blog and pick something. Seriously they do.

You see, I got into climate change activism because I realized that I could not look my kids in the eye and tell them I was doing everything I could to protect them. Because I did not know the facts on climate change and I had not yet made it my business to cause an end global warming.

Now I have made that promise. Right to their sweet faces. And now my kids are holding me to my word. Which leads me to my very important question:

How do you have an issue like climate change be relevant and actionable for people? I am asking you because, well, you are the one I am trying to motivate.

We (yes you and I) are like that frog in a steadily warming pot of water, most of us not doing anything (or enough, or the right things) about this “slow” change until it's too late to jump out. This comedic video from the Newsroom illustrates very well our relationship as Americans to this issue. Reality is surprisingly close to the situation illustrated there. We are shockingly close to the tipping point (if not past it). Are you personally aware of the facts? If not, my kids want you to get educated and take action. (See the list below.)

By the way, many of you may actually be very engaged. If so, use this article as you wish to inspire you newly and to spread the word.

To complicate matters, the current context for climate change (and many issues) is one that includes debate. Human beings love being right more, sometimes, than taking action, so they debate. But debating is talking about the issue, which is very different from speaking for an outcome.  Laughlin Artz (Director of So You Want to Change the World) likes to say that when the house is on fire you don’t discuss what is happening, you call a fire truck. I am not interested in debate or the wild morass of opinion. I am only interested in whatever it takes to end global warming.

While many thousands are working on the issue, what is radically missing is a bold promise we can all get behind — a "this shall be" kind of relationship to climate change. Sir David Frederick Attenborough said as much in his recent interview with President Obama in the following interaction, which includes the President’s response:

SIR DAVID ATTENBOROUGH: “What concerns me is that when we’re sitting in Europe, we see what you did by saying, ‘We’re going to put a man on the moon in 10 years’. Supposing you said in 10 years the United States will organise and the world, and energise the world to find a solution, to find a way of producing energy with no problems. That is to say, exploiting sunshine to a degree and finding ways of storing electricity. Because if you did that, so much would be, some problems would be solved”.

PRESIDENT OBAMA: “Right, well that’s what we’re going to be shooting for.”

Obama's work has been brilliant in the area of climate change. However, “that’s what we’re going to be shooting for” and “this is a priority” are the kind of statements made by leaders that point to a critical missing piece–the promise. In fact, so lacking is this kind of statement that when you google "promise to end global warming" an earlier article I wrote for Austin EcoNews comes up 4th.

Now, why would that matter? Because what it will take to actually end global warming before it is too late (full decarbonization of our economies, through carbon pricing, by no later than 2050) requires a level of global cooperation unprecedented in our history. AND IT CAN HAPPEN. Give your mind the freedom for just a minute to consider, it’s not hard, just different. I mean radically different. It would mean you (yes you) engaging powerfully as a member of civil society with your sector leaders and government.

Now, there are MANY fabulous organizations doing everything necessary to make it possible to move past the current technological, social, political and economic barriers. In this working document, we are compiling that list now. And the UN has laid out a foundation for collaboration and cooperation among nations. The delegates have made great progress. But, even with the current delegate promises, we only have a plan in place to get halfway to where we need to be. (And when I say "need to be" we have NO wiggle room here.)

Take a look at the graphic below from PathwayThroughParis. The two darker blue sections represent the UN delegates promises (current and expected). The lighter blue section is reserved for “ratcheting,” which is the political term for the hope that once they are in action, our countries will “ratchet up” their efforts to fill the gap. It’s a great political strategy for building cooperation, and Obama’s call for a 5-year review process helps make that possible. However, in the absence of a strong civil society movement in which we the people declare an end to global warming, we will be reduced to hoping while the temperature slowly rises. Are you willing to rest the health of our children’s future on the hope that the UN will fill the gap? I, for one, am not. Especially because that is not even what they are designed for. 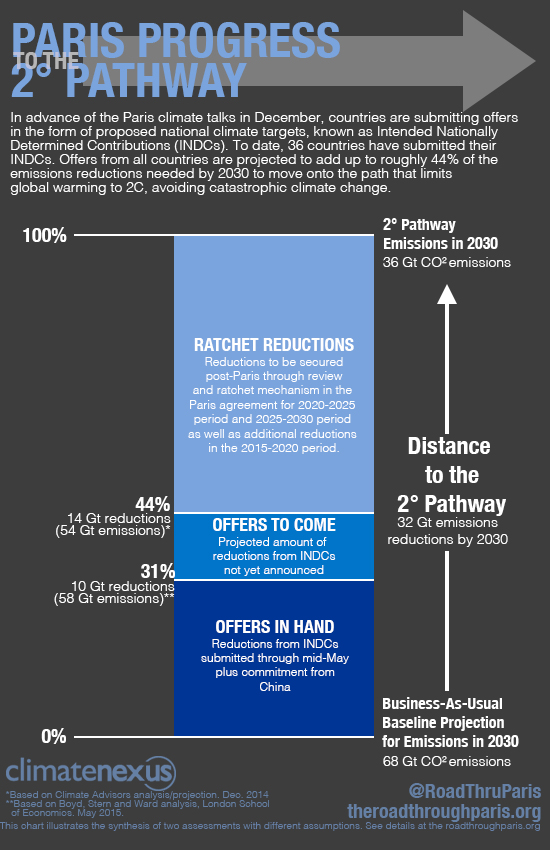 The UN is not set up for the kind of bold leadership that speaks into the hearts and minds of the people, of the businesses, of governments, and gets everybody onto the same train — one in which we close the gap between where we are and what it will take to prevent our extinction. So folks — it’s on us. You and I. This is my responsibility. I invite you to say the same and then get in action.

Why We (Yes You and I) Cannot Wait to Take Action:

Have you wondered how much time we have to shift the trajectory? Have you wondered when the biggest impacts will begin to hit the fan? The best thinking says 10-15 years is likely all we have left to change our trajectory. That’s an incredibly aggressive timeline which requires action right now. And as for the impacts, there is a very good chance that my 11-year-old and 9-year-old will personally witness massive devastation to our ecosystems and experience tremendous personal loss and hardship. What about the children you know and love?

According to new research published in Science Advances, we are, in fact, at the beginning of the 6th mass extinction. The goal of the study was to discover whether even the lowest possible estimates of the comparative increase in extinction rates justified the conclusion that the sixth ever global species extinction is under way. The conclusion:

"The evidence is incontrovertible that recent extinction rates are unprecedented in human history and highly unusual in Earth’s history. Our analysis emphasizes that our global society has started to destroy species of other organisms at an accelerating rate, initiating a mass extinction episode unparalleled for 65 million years." — G. Ceballos, et. al. in Science Advances 19 Jun 2015. 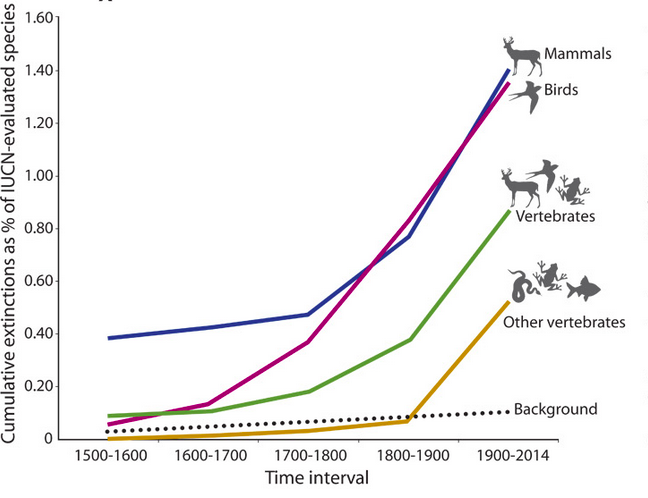 We have at MOST ten to fifteen years to reverse this trend.

From the same article:

I remember hearing stories about what it was like in the US during World War II, when everyone was contributing something to the war effort. And consider how, in recent natural disasters, we've heard (and many of us have the been players in) story after story of groups of people coming together to the aid of their fellow humans. Our species, with the ability of speech, has the power to make miraculous changes. In times of crisis, politicians can become statesmen. Business owners can become heroes. People with creative solutions can inspire society. It’s not hard, it’s just different.

But this kind of alignment toward a great purpose does not just happen. It is created the moment someone says — we are going to deal with this now. Someone declares, "We are going to the moon." "We are ending slavery." "We are healing South Africa." While yes, there is a critical mass of agreement required to make real change, those agreements start with one voice (or a few) saying "this shall be."

So I am saying it — In my lifetime, I say we will stop global warming and put an end to the acceleration of species extinction. I demand that all UN delegates align on this purpose, and that MY government ratifies this decision.

And you can say that. You can blog it. You can put it on Youtube. You can write your politician. You can make the Paris Pledge and or join an activist group. I request you take one bold action today. Don't talk about this issue. Speak for a trajectory shift. Make a request. Make a declaration. Make a promise and keep it.

Now, I think one thing that might be a barrier is that people don’t like to promise what they can’t guarantee to deliver. But if you look at the work of folks like Mahatma Gandhi, Mother Teresa, Nelson Mandela, Reverend Martin Luther King Jr., it started with a promise and a willingness not to give up. With 7 billion people on this planet, even if only 1 billion of us aligned behind a purpose to save our home, I am saying it’s possible. It’s possible. It’s not hard. It’s very different and totally unpredictable, but POSSIBLE. And for that possibility, I am willing to give my whole life.

My people, it is time to take action — starting with your voice. Shifting the trajectory of our planet's well-being starts and ends with you.

In an historic breakthrough at the recent G7 meeting, leaders of the world's seven largest high-income economies (the US, Japan, Germany, the UK, France, Italy, and Canada) committed to full decarbonization of their economies by the end of the century. Ceres has an entire list of companies putting a stake in the ground. IKEA just committed $1 Billion to fight climate change.

These are groundbreaking steps. And represent some of the many steps needed to begin to shift our trajectory. Let's tell our politicians and sector leaders we believe in their basic goodness. That we have their back. And let's not stop there. Let's volunteer like crazy on environmental efforts. Let's talk to our businesses, our schools, our local governments.

This is the movement that will test our capacity for greatness. It will take everything we have. Who's in?????

ACTIONS YOU CAN TAKE NOW:

#5 If you are an expert in a related domain, please contribute to our effort to put in one place a summary of all the best efforts and players. Here is the document. Instructions are in the document.

#5 TELL PEOPLE YOU HAVE A PROMISE THAT GLOBAL WARMING END AND INVITE THEM TO JOIN THE MOVEMENT.